Associated with some of the greatest names in painting, this small European nation has consistently punched well above its weight in the arts arena. And with two of the contemporary scene's fastest-rising stars hailing from the Netherlands, Dutch art is likely to come under increasing scrutiny as a potential source of future greats.

We take a look at those new art heavyweights in the making, as well a couple of established names and two relative newcomers who are already making waves. 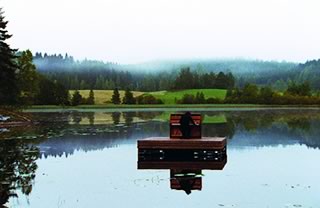 Guido van der Werve's beautifully conceived video work has carved itself out a formidable reputation in just a short space of time. Trained as a pianist, van der Werve attempts to render musical qualities in visual and conceptual form: "to create visual art that [is] as direct as music".

Most of his films - which since 2002 have simply been numbered - feature the artist himself, as well as, appropriately, key works from the classical music repertoire.

In Nummer vier: I don't want to get involved in this, I don't want to be part of this, talk me out of it, 2005, van der Werve and a piano are seen floating on a pontoon in the middle of a mist-shrouded lake.

The artist plays Chopin's forlorn Nocturne No.1 in B flat minor, and at its conclusion, the camera cuts to a barge carrying a choir and orchestra who perform Mozart's Requiem Mass as the vessel slips from view and the music out of earshot.

Nummer Zes: Steinway grand piano wake me up to go to sleep and all the colours of the rainbow, 2006, shows the artist ordering the Steinway of the title, which is subsequently winched into his Amsterdam apartment to the strains of Chopin's Piano Concerto No.1 in E minor.

A cut to the flat's interior reveals van der Werve performing the piece on the purchased instrument, accompanied by an orchestra cramped into the tiny space. Eventually, we see the piano pass back though the window and all that remains is a rainbow, curving an arc across the white apartment walls.

A pervasive sense of melancholy is a particular feature of Van der Werve's work, and his careful selection of musical score is, of course, key to this mood. While occasionally using his own compositions, his love of a particular vein of High Romantic opus is clear "... I think most artists have a way of finding their own reality, and in my case it happened to be Romanticism". 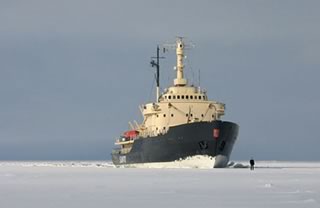 The Romantic movement is, of course, inextricably associated with the notion of the visual Sublime, a symbiosis made particularly evident in the celebrated workNummer Acht: Everything is going to be alright, 2007, (left) in which the artist, a tiny figure seen from afar, strides in front of a massive icebreaker through the frozen landscape of the Finnish Gulf of Bothnia.

Perhaps, however, van der Werve's most extraordinary statement of Romantic rebellion occurs in Nummer Negen: The day I didn't turn with the world (2007). For this piece, the artist stood at the geographic North Pole for a single day, turning clockwise while the earth below him moved in the opposite direction.

Filmed every 6 seconds and condensed into 9 minutes of time-lapse footage, this poignant evocation of the Romantic hero - the tortured individual; the Wertherian or Byronic outsider - depicts the artist quite literally out of synch with the rest of the world. 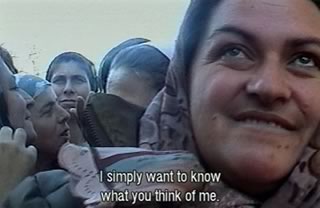 Renzo Martens is another Dutch filmmaker whose work is garnering international plaudits.

His movies - pseudo-documentaries shot in regions of conflict or poverty - critique the apparent neutrality of the investigative documentary format, as well as the immense power of many of the aid organisations operating in conflict-ridden regions of the world.

Martens casts himself as roving reporter with a difference, quickly undermining audience expectations of type by adopting unexpected personae. In Episode 1, a film made during the Chechnyan war, Martens displays apparent nonchalence towards his subjects' plight by insisting on asking them about himself; even discussing his girlfriend back home with a bemused subject who apparently bears a striking resemblance to his partner.

As Martens himself has said: I made Episode 1... as a delegate of the viewing public, an audience that is mostly interested in themselves. So I didn t ask the people how they felt now their legs had been amputated and those kinds of questions. But I asked them how they thought I felt. If they thought I was handsome or how I should seduce my girlfriend back in Brussels. ... I turned it around because in reality it s much more about how we feel and less about how they feel.

Martens' most recent work, Episode 3, was filmed over 2 years in the African Congo, one of the most impoverished and war-torn regions in the world. In it, he adopts a more complex series of roles, veering from blase spectator humming rock tunes, to vociferous advocate of unorthodox solutions to the misery he encounters.

Insisting, for example, that poverty is the only real commodity owned by starving villagers, he attempts to persuade them to sell images of their dead and dying to photo-journalists rather than allow the media or unscrupulous donation-dependent NGO's to profit from their plight. 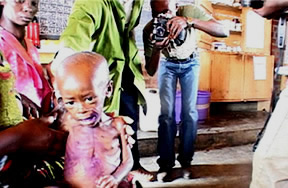 The astringency of his argument is underpinned by a shocking image that permeates the film, a neon sign reading 'Enjoy Poverty please', which is first erected in a village then, in the film's final moments, seen floating downriver in a boat.

"...The poor are never involved in getting anything back from the exploitation of their poverty, they have no ownership over it, they are mostly not even aware of the fact that their willingness to be photographed brings in huge amounts of money for the NGO's"

Martens' work is clearly polemical, with some questioning the artist's unorthodox approach to suffering and his own complicit role in the very mechanisms of exploitation he seeks to investigate. This, however, is a paradox of which he is acutely aware: "As the producer of the film, you are always implicated. You are always involved. Many filmmakers and photographers try to cover this up."

As Martens sees it, it is only by deviating from the 'norms' of documentary that we can begin to empathise afresh - as well as contemplate the potential manipulation of both audience and subject.

A profound message, and little wonder that Martens' profile has soared over the past year.

There are no products in your shopping cart.